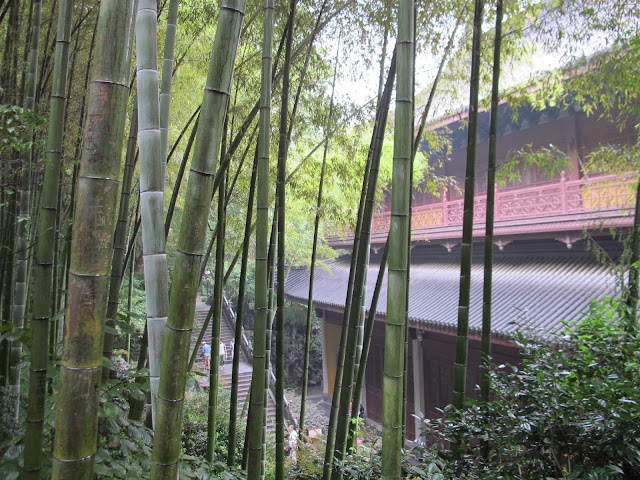 While tourists wait out the downpour in high-ceilinged temple halls, a solitary Tibetan monk makes his way up the complex's series of stone staircases. Bowing low at every step, he prays his way unhurriedly from the entrance of Lingyin Temple to the hall at its highest point. His burgundy robes and ragged apron must be soaked through, but a cheerful smile never leaves his face.

Tibetan Buddhism, explains my guide, a yellow-robed monk who lives at Lingyin, is a different faith to the Buddhism he and his brothers practise at the centuries-old temple, but they welcome pilgrims of all stripes here. As well as Tibetans, Japanese Buddhists visit in large numbers – a 3-metre tall statue commemorates Master Kūkai, a Japanese monk who visited Lingyin in the 9th century. They've had some important modern visitors too – the late Chinese leader Deng Xiaoping was a regular worshipper.

Lingyin is one of the best known Buddhist temples in China and, though many of the buildings and statues you see there today are modern reconstructions, the site itself dates back to the 4th century. A short drive from Hangzhou's busy downtown, it is a remarkably peaceful place, especially considering the fact that it attracts up to 10,000 visitors a day.

To reach the entrance to the temple, I walk past reliefs carved into the face of Feilai Feng, or 'Flying Peak'. There's a path running up the 209-metre hill but it's too wet to climb today so I content myself with watching terrapins bob in the stream that flows at the base of the hill and admiring the most prominent of the carvings, a large – and very jolly – Laughing Buddha.

I'm met by my guide inside the temple complex itself. Walking sedately with him up and down stairs and into and out of halls I feel like a celebrity hanger-on: so picturesque does he look in his monk's robes that every few minutes someone takes a photograph of us. My guide doesn't seem to mind; having lived here for six years, he's presumably used to such things by now.

We begin in the hall of the Hall of the Heavenly Kings, with its four massive statues dedicated to the winds and 800-year-old Skanda Buddha, the oldest in the complex. Higher up the hillside an enormous Gautama Buddha, the founder of Buddhism in India, nearly fills a temple hall all of its own. A few flights further is a small gallery of beautiful artefacts associated with the various strands of Buddhism, including a statue of the Buddha carved from one huge piece of South African rose quartz.

The interior walls of one of the smaller halls are completely covered by intricate frescos telling the story of Ji Gong, a 12th-century monk who devoted himself to the poor and needy yet refused to obey monastic codes. As my guide leads me from panel to panel, recounting how this naughty Buddhist Francis of Assisi got so drunk that he was expelled from Lingyin, a crowd gathers around us, eager to hear these tales too. 'Was he real, this monk?' I ask. 'Oh, he was real,' replies my guide. 'I'm not sure about the exact truth of all these stories, but he certainly lived'. He certainly did.

Outside each hall stands a large brazier filled with hot coals. The air is thick with smoke from the bundles of burning incense wafted by tourists and pilgrims as they bow in prayer. I ask my guide why some people bow in four different directions and some just facing the hall in question. He smiles again. 'Some people don't know what to do,' he says, 'so they make it up.'

Very little of Lingyin is original – much was rebuilt in the 1950s after the havoc of the civil war. Fortunately, this hardly takes away from the atmosphere. The presence of my guide and his 120 brother monks, as well as the idyllic mountain forest setting, have kept Lingyin from becoming Disneyfied, despite its evident newness.


On my way out I spot an old man sweeping leaves in front of one of the temple halls. For the first time during my visit to Lingyin, there's no one else to be seen – it's as if all the other tourists have been spirited away. As I turn to walk back down the stairs the sound of his broom on the wet ground hangs in the air. 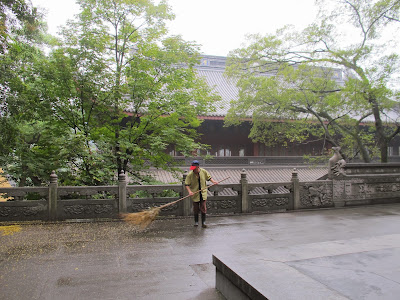 Jo Caird
This blog is about the places I've seen, the things I've done, the people I've met, the food I've eaten and the drinks I've drunk on my travels, both at home in London and away. For more about my work as a freelance arts and travel journalist for publications including the Guardian, the Independent and Condé Nast Traveller, visit www.jocaird.com